skip to main | skip to sidebar

The original video was small and crooked, so I zoomed and stabilized it for your viewing enjoyment. It's still blurry unfortunately, but it gets better halfway through.

I did not record this video nor do I know who did. I'm just passing it along in an improved manner. :)
Posted by TR2N 1 comment:

San Diego Comic-Con 2008 just revealed a BIG surprise courtesy of an old school property that’s about to get a big screen revamping.

We have just seen footage of a new “Tron” movie and yes, Jeff Bridges is back!

During a Disney panel that was ostensibly set up to promote “Race to Witch Mountain,” the studio waited until the very end to reveal their new version of “Tron.” And the new film has an official title, “Tr2n.” Yes, it is officially a sequel.

Since no casting or release date had even been announced for the film, the debut of fully completed footage, much less starring Jeff Bridges, caught everyone by surprise.

And it wasn’t just the fact that Bridges appeared in the teaser, the Oscar-nominated actor appeared to be playing two different characters — Flynn (from the original) and a younger version of himself.

Here’s what was shown:

Calling in a second to explain.

- The Disney logo appears and quickly seems to get digitized.

- We pan over ominous clouds into a digital city landscape only to find a man in a updated “Tron” costume. He’s on the run.

- The man jumps into a brand new 2008 version of the familiar light cycle.

- And a huge chase ensues with a pursuer in a dark mask after our racer. Unlike cycle races of old this one goes up and down AND side to side.

- The chased man is vanquished, crashing horrible. As the pursuer gets off his cycle he pulls a familiar disc from his back. The winner looks up to a previously unseen observer.

- And the observer is…Jeff Bridges! An older (and now evil) Flynn?!? He rises from a meditative state in his watchtower to see the pursuer do his bidding.

- The vanquished man pleads to his pursuer. “It’s just a game!” And then the final big reveal: the pursuer takes off his helmet and he is also Bridges, a seemingly younger Bridges!
Posted by TR2N No comments: 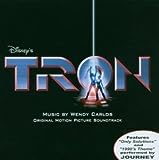